Beyond Rhetoric, a Change of Pace is Needed to End Gender- based Violence

After a few weeks, what has been left in Italy from the International Day for the Elimination of Violence against Women? There is, of course, the official data on the offences concerning gender-based violence, the calls to the national hotline 1522, the shelters as well as the stories of their staff regarding the precarious conditions they are often forced to work under to provide support to the women they assist.

Yet, the most striking feature of this very rich period of data and initiatives is, once more, the wide gap between the timely commitments announced by institutions every 25 November and how poorly these commitments are actually implemented during the other 364 days of the year. The evidence is clear and this is why ActionAid decided to call the 2020 edition of its annual monitoring report on the effective implementation of the national anti-violence system, Between Rhetoric and Reality.

On paper at least, Italy has the necessary tools available to take incisive action to prevent and combat violence. The main international conventions on women’s rights have been ratified, the laws (even if there is room for improvement) are in place, and there is also a three-year national action plan, which is about to expire, and one about to be drafted for the next three years. These tools are the “clothes” with which Italy can present itself at the relevant international tables, whilst also making a reasonable impression. But behind the clothes, what’s there?

They say that numbers don’t lie

And they don’t in this case either. Since the introduction of Italian Law 119 of 2013, which established annual funding for anti-violence centres, the funds allocated to strengthening the shelters and safe accommodation facilities increased by 55%, from 16.4 million euro for the two-year period 2013-2014 to 30 million euro in 2019. This funding increase, however, has not been matched by an improved management capacity, neither at the national level nor at the regional one.

It takes, on average, about 18 months for the funds to reach their destination. This is the situation of disbursements as of 15 October 2020: 72% of the funds for the 2015-2016 two-year period have been disbursed; 67% have been disbursed for 2017, 55% for 2018, and 10% for 2019 (Figure 1). The 2020 funds, allocated almost a year ago by the relevant budget law, have not yet been allocated. The relevant Prime Ministerial Decree (DPCM) was announced on 25 November, but, to date, it has not been published in the Official Gazette. Essentially, this means that the resources allocated almost 12 months ago - and earmarked for anti-violence centres for the work already done in 2020 - have not even left the state coffers yet.

There are several reasons for these delays, including the low priority given to fighting violence by national and local political agendas and the frequent lack of administrative staff in the relevant offices. One might say that, by looking at the analysis of the data collected, it would appear that the “human factor”, rather than the allocation procedure itself, determines the time needed to disburse funds. 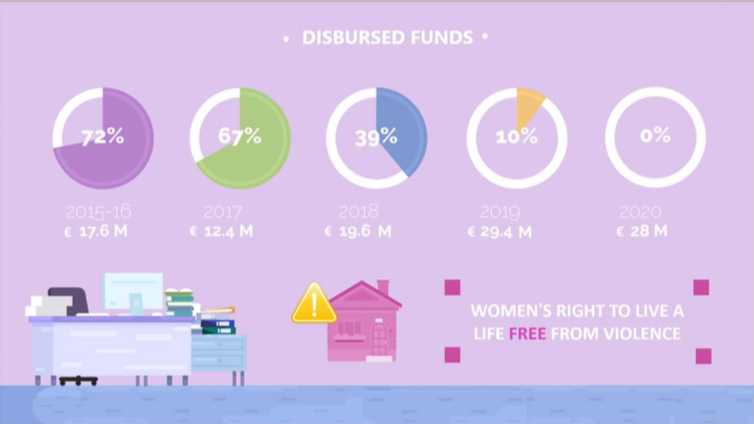 The analysis of the implementation of the 2017-2020 National Strategic Plan to End Male Violence against Women is in line with the bleak picture described so far. A few days before the plan’s conclusion, only 60% of the planned actions had been implemented and many of these fall under ordinary protection activities (i.e. those related to the aforementioned state funds against violence) and international cooperation for projects to combat violence in third- party countries.

The preventive measures implemented, which are essential for reducing the incidence of violence in a country that is still largely male-dominated and misogynistic, are, for the most part, inadequate. Indeed, the data collected shows a skewed allocation of funds between the intervention pillars (Prevention, Protection, Prosecution and Punishment, Promotion and Assistance), as well as an insufficient allocation of funds (132 million euro) to cover all the planned actions (102) (Figure 2). In fact, specific resources have only been allocated to 62 activities, thus providing for many interventions at no cost because they are based on existing projects. 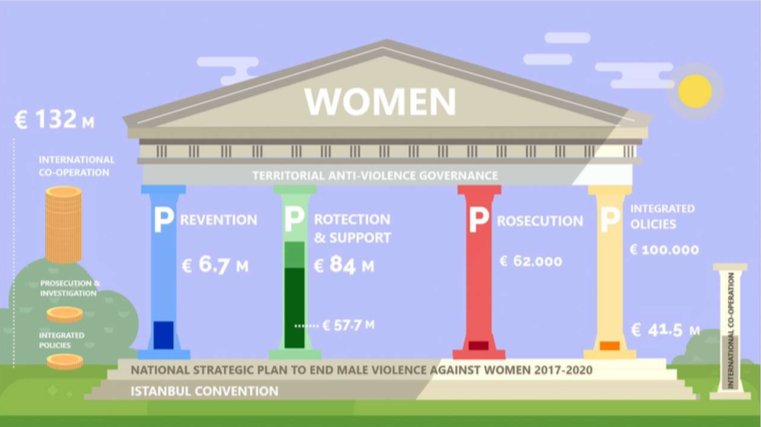 Source: ActionAid analysis of documents and records and administrations involved in implementing the plan

In general, the analysis of the 2017-2020 anti-violence plan - the third to date in Italy - has highlighted the poor governance, operational implementation, and management transparency of the Department for Equal Opportunities and many of the administrations involved. Above all, the analysis has made it clear that the opportunity has been missed to structure a coordinated

and widespread system throughout the country that is capable of guaranteeing women the right to a life without violence.

The only thing missing was a pandemic...

The ongoing global pandemic has confirmed the fragility of our anti-violence system. Faced with old and new issues, anti-violence centres have, nevertheless, shown great adaptability and resilience in order to ensure women - even in the most difficult weeks of the lockdown - assistance and protection. Even where the health emergency was the most serious, as in Lombardy, the centres were generally able to guarantee 24-hour availability despite a 50% reduction in human resources. Most shelters’ workers interviewed said that they felt alone, isolated, abandoned, especially as a result of poor institutional coordination, the uneven functioning of local networks, the limited contact with key players (social services, health centres, law enforcement agencies, judicial offices, juvenile courts), the lack of health guidelines and personal protection equipment, and the chronic shortages of shelters in Italy. This last point made emergency assistance particularly complex, forcing anti-violence centres to resort to external facilities (B&Bs, hotels, private apartments), despite the Ministry of the Interior’s Circular of March 2020 inviting the prefectures and local authorities to identify accommodation to ensure the greatest health protection for women and the shelters’ staff.

The institutional response to Covid-19 was largely rushed, late and insufficient, despite the efforts made, for example, by the Department for Equal Opportunities to promote the national hotline 1522 in the media, pharmacies and post offices, to speed up procedures to transfer funds for 2019, and to provide funding directly to the anti-violence centres that had to incur extraordinary expenses due to the pandemic. In fact, it is clear that the Italian protection system has experienced huge management, economic and coordination difficulties that could have been avoided if the national plans against violence had been implemented as planned from 2014 to the present.

Why persevere, with hope and trust?

In a situation that is largely disheartening, it is important to emphasize some positive signs, not only to recognise that some aspects are changing, albeit very slowly, but also to applaud and give credit to those who, each and every day, promote this change and slowly make it possible: women. Those who push the feminist movement on a daily basis, who accompany other women on their escape from violence, who persevere, in their field of expertise, in advancing a different vision of the world, of power and of relationships.

What positive signs are we talking about? Here are some of them.

The data. There is no doubt that progress has been made, with a dedicated section on the ISTAT website and a draft bill on statistics on gender-based violence that would allow Italy to have consistent, updated and multi-source data; in addition, progress is steadily being made in constructing reliable indicators and statistics thanks to the European Institute for Gender Equality (EIGE) and the Fundamental Rights Agency (FRA). This is an important step forward because this data will be able to inform future European policies, with positive effects for Italy and other EU countries.

The media. More is spoken today about violence and women’s rights. And diversity, in a broad sense, is represented in a far greater way in the mainstream media. While it is true that, too often, the talk about these issues is incorrect (or simply rhetorical), it is also true that the identities represented have increased and are much more visible. For example, many television series tell stories from the point of view of those who still feel and experience marginalisation on a daily basis - non-binary teenagers, transgender people, young migrants, people with disabilities - reducing diversity less to secondary roles or, worse still, to grotesque characters. In this context, women are increasingly portrayed in the variety of their lives and needs. Such small steps can, however, have a huge impact in the long run on the collective imagination and socio-cultural prejudices that sustain discrimination and violence.

Funding. The annual funds provided for by law may be few, certainly discontinuous, but they are there and should be better spent. For anti-violence centres, however, struggling to survive in the absence of certain and adequate funding, this is undoubtedly meagre consolation. But it is also, and above all, for this reason that we need, now more than ever, to demand an account for the use of available public funds and to push for an estimate of the costs actually incurred annually by anti-violence centres and shelters.

But a change of pace is needed

Covid-19 is giving policy makers the opportunity to change pace. For this to happen, the institutional architecture will have to reflect the enormous challenge we face, driven by the positive developments of recent years. Starting with the establishment of a Ministry for Equal Opportunities - a historic feminist demand but more relevant than ever - appropriately staffed and adequately funded, with the primary goal of guiding and influencing every other ministry so that policies, beginning with those in the national recovery and resilience plan, are designed, implemented, and evaluated on the basis of an intersectional approach focused on combating violence and gender inequalities.

Parliament will have to push for amendments to the law regulating funding for the fight against violence (Italian Law 119/2013) in order to speed up disbursements, by introducing the obligation to adopt a three-year plan, with funds allocated on a multi-annual basis and constantly monitored.

In turn, the Regions will have to speed up the transfer of funds and contribute to the future national plan by identifying, together with the anti-violence centres, priority interventions and

by scheduling their activities and resources in a way that is integrated with those of the national plan.

These are specific actions that only require the political will in order to be implemented. There is only one step, though, beyond the rhetoric of 25 November: the daily political relevance of the fight against violence and women’s rights in general, across all components of Government and, more generally, of the State.