Casa Lorena, a home for all

The home is a highly symbolic place for women: it is a private space, in contrast to a public sphere too often still denied to them. For a long time, feminism has tried to undermine this dichotomy, bringing what was happening inside the home out into the open, in an attempt to make what was private public, political.

Crossing the threshold of a home is always a gesture full of meaning. Entering into a house of women is even more special. Together with the coordinator Daniela Santarpia, we want to tell you the story of Casa Lorena, a house of women.

"To talk about Casa Lorena we must start from 1999, when the Cooperative EVE was born: an organization of women committed to preventing and combating male violence. The cooperative was born with a specific mission: to promote women's rights and subjectivity, focusing on empowering women who survived violence in regaining their personal autonomy. It is with this goal in mind that 13 years later, in 2012, Casa Lorena was created in Casal di Principe, in the city of Caserta (in the south of Italy). Casal di Principe is well known in Italy as a very complex terrain: the shelter was built in a villa that was reclaimed by the state from organized crime. The house now welcomes and supports many women who suffered mistreatment and abuse within or outside their families, spreading a culture of combating gender-based violence in all its forms. In the same year, within its walls, a project called Le ghiottonerie di Casa Lorena (the goodies of House Lorena) came to life. Le ghiottonerie is a catering workshop that also produces jams and baked goods, created to meet the very concrete need of employment from the women hosted in the house. 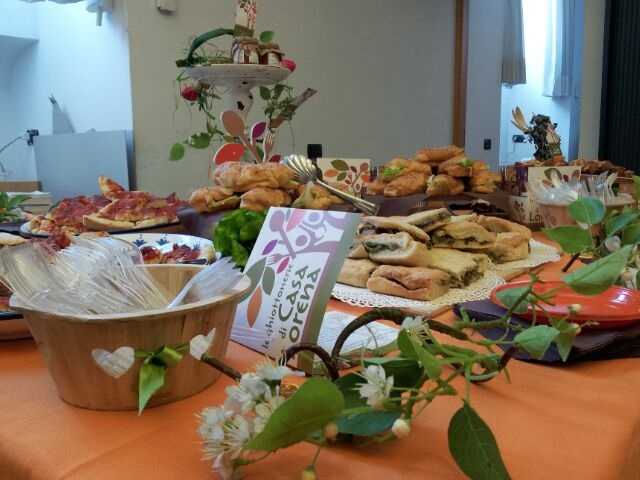 The women we meet in the anti-violence centers belong to all social classes: some are economically independent and professionally credentialed, others have almost no financial autonomy and can barely make it to the end of the month. When they reach out for support to leave a violent relationship, they often struggle with the need to find decent living conditions for themselves and their children.

“A job, even before financial support, is the essential milestone to women's independence and self-esteem. One of the problems social operators have to face when giving support to abused women, it is to navigate them through a labour market in which they are often mismatched, one that is mainly based on informal contracting or irregular positions. Caserta has one of the highest unemployment rates in Italy and in Europe,” said Daniela. “This is what pushed us to invest heavily in creating job opportunities”.

Women who come from a path of violence encounter many difficulties during their job reintegration.

"Violence is an obstacle to independence. Some women lose their jobs because they are harassed at work by their partners or former partners, others because their partners prevent them from going to work. Sometimes they leave work because of the signs of violence and the health problems that abuse creates. Violence leaves marks, impoverishes women from drawing upon their inner resources, drains their self-esteem and sense of self-efficacy. Working on their empowerment becomes essential to allow women to rebuild themselves and to make them realize they are active subjects in society, able to work and restart their lives. Only after this "re-flourishing" of inner resources will it be possible for a woman to positively engage with a work environment”.

Casa Lorena is a house of dreams, and has big plans for its future: thanks to funding from the Equal Opportunities Department, it has expanded and diversified its product range in its culinary workshop, to allow the employment of a greater number of women.

You can see their products and follow their stories at leghiottoneriedicasalorena.com.