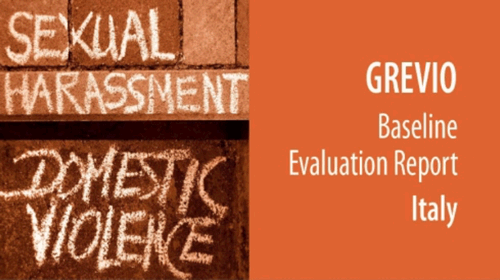 Last January the Council of Europe’s Group of experts monitoring the implementation of the Istanbul Convention (GREVIO) published its first report on Italy. The Report contains a comprehensive analysis of the implementation of the provisions of the Istanbul Convention and highlights both positive initiatives and key concerns of the Italian system regarding violence against women (VAW).

Despite a number of positive measures and a succession of legislative reforms, mayor concerns raised in the Report are the lack of co-ordinated multiagency response to VAW, the uneven spread of specialized support services throughout the country, the widespread secondary victimisation of women victims of violence, the shortcomings on the determination of custody and visitation rights, and the emerging signs of a tendency to reinterpret and refocus gender-equality policies in terms of family and motherhood policies.

Significanlty for the issue of women economic empowerment, the Report expresses concerns for the resistance which the cause of gender equality is facing in Italy and its repercussions for women’s rights and related issues. Stressing that violence against women is a consequence as much as it is a cause of gender inequality, the Report notes with concern that Italy ranks 70th in the 2018 Global Gender Gap Index of the World Economic Forum, and it has achieved a score of 63 out of 100 according to EIGE’s Gender Equality Index for 2019 compared to the EU average of 67,4.

According to GREVIO, the area of economic rights is particularly worrisome: as of data from Bankitalia, women in Italy possess on average 25% less economic resources compared to men and this divide increases to 50% in couples. 40% of married women are unemployed and those who work earn less and are still discriminated against in the workplace. Austerity measures introduced in response to the economic and financial crisis appear to have had a severe and disproportionate impact on women, in particular women with disabilities, older women and women domestic workers. Poverty rates among women, in particular single mothers, are high.

As for initiatives adopted to support VAW survivors’ empowerment and economic independence, GREVIO notes that all measures included in the 3rd National Action Plan remained at an early stage of implementation and the authorities did not provide any data illustrating how many women had benefited from measures of this kind which were already in place under the 2nd NAP on gender-based violence.

Against this background, GREVIO considers that closing the gender gap and promoting women’s autonomy and emancipation in all fields of life should remain a priority in the agenda of policy makers. In this connection, GREVIO urges the Italian authorities to pursue their efforts to devise and effectively implement policies of gender equality and the empowerment of women as well as to ensure that such efforts are not undermined by policies which overlook or downplay gender inequalities and gender-based violence by failing to acknowledge the structural nature of violence against women as a manifestation of historically unequal power relations between women and men.

On March 8th 2020 D.i.Re – the Italian network of antiviolence centres has launched the Campaign “Violence against women. What state are we in?”. Every month, until March 8th 2021, the campaign will raise awareness on GREVIO’s recommendations asking for the full implementation of the Istanbul Convention.